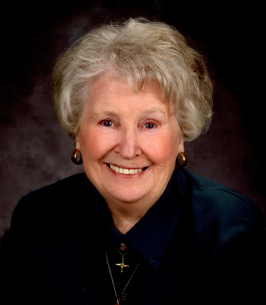 It is with a heavy heart that we announce the passing of Esther McConkey on Monday, June 6, 2022.

Esther came to Canada February 1955 from Belfast, Northern Ireland with her family. She was joined by Bill in April of the same year and they were married shortly after and soon started their family. Esther raised 4 children while working numerous part time jobs to help support her family. She joined the CWL (Catholic Women’s League) 54 years ago and has been a devoted member during this time, taking on many roles and responsibilities. Esther also sang in the church choir at St Cecilia.

Esther was a girl guide leader, sat on the board at Franis Klein Centre, and was a passionate volunteer at St Vincent De Paul. One of her favorite jobs was working at Heritage Park for many years; she played the organ, baked scones, and worked in several historic buildings. Esther was an avid member of TOPS (Taking Off Pounds Sensibly) for many years. Her greatest joy was when she became a KOPS (Keep Off Pounds Sensibly).

Esther had many memorable vacations, including taking her family to Hawaii, her trip to Disneyland to meet Mickey Mouse at age 65, Mexico with the Girl Guide leaders and several trips back home to Ireland. Esther kissed the Blarney Stone in Ireland, which is said to give the “gift of gab” which has carried her through life, telling stories and constantly meeting new people along the way.

Esther lived for her grandchildren, and they were the loves of her life. She would immerse herself in her grandchildren’s hobbies and sports and was their biggest cheerleader. The fondest memories her grandchildren shared were having sleepovers and spending time with their cousins at Esther and Bill’s.

The family would like to thank the staff at Bethany Riverview, Cowboy Trail for their care and support over the last 3.5 years.
Prayers will commence at Choice Memorial Cremation and Funeral Service (#105 – 4715 13 Street NE, Calgary, AB) on Tuesday, June 14, 2022 at 4:00 PM. A Funeral Mass will be held at St. Cecilia’s Roman Catholic Church on Wednesday, June 15, 2022 at 11:00 AM. Reception and burial will follow.

To view and share photos, condolences and memories of Esther, please visit www.choicememorial.com.