To share your memory on the wall of Ernie Boushy, sign in using one of the following options:

It is with great sadness that the family of Ernie Boushy announces his passing from cancer on Monday, May 25, 2020 at the age of 86 years.

Ernie was born in Gilbert Plains, and raised in Dauphin, Manitoba, where he learned to curl and play baseball. Ernie excelled at both sports, playing baseball with the Dauphin Redbirds, Carman Cardinals, the Appalachian League in Welch, West Virginia, and the Piedmont League in Lancaster, Pennsylvania. Ernie won a batting title with an average of .349 in 1953 and was inducted into the Manitoba Baseball Hall of Fame in 2000. From 1964 to 1967, Ernie skipped his curling team to four consecutive Manitoba Mixed Curling Championship titles, winning the inaugural Canadian Mixed Curling Championship in 1964, and then again in 1966. In 1967, Ernie skipped his team to a silver medal at the first Canada Winter Games in Quebec City. Ernie and his team were inducted into Manitoba’s Curling Hall of Fame in 1990 and Sports Hall of Fame in 1994, having won 104 victories in 122 games.

Ernie met his wife, Phyllis, in Dauphin, and they married in Eriksdale in 1955. It was there that Ernie began his career in the oil business, where promotions took him to Winnipeg, and then Calgary until his retirement in 1989. Ernie will be forever loved and missed by his wife of 64 years, Phyllis; his son, David (Carrie) Boushy; daughters, Joanne (Ken) Paetsch and Debbie (John) Bender; grandchildren, Jacqueline (Michael) Conte, Katherine Paetsch, and Riley, Carson and Spencer Bender and great grandchildren, Joseph Conte and Carter Paetsch. Ernie will also be lovingly remembered by his sisters-in-law, Linda (Robert) Ames and Patricia Thompson; great friends, Anita and Jim Fyfe and numerous nieces, nephews, and cousins. Ernie was predeceased by his grandson, Tyler Bender in 1991 and his brother-in-law, Don Thompson in 2016.

Ernie lived his life to fullest. He loved to laugh, play sports, and play Bridge (was a Silver Life Master). He loved to listen to bluegrass music and attended the Shady Grove Bluegrass Festival near Nanton every year. And, most of all, Ernie loved spending time with his family. He made an impression on everybody he met and will be missed by everybody who knew him. Ernie’s favourite saying was: “It is what it is, and if it wasn’t this, it would be something else.”

The family would like to thank Ernie’s team of doctors, Drs. Chatha, Heng, and Kawakami, as well as the excellent care and support provided by the staff of AgeCare Skypointe.

At Ernie’s request, there will be no funeral. A private family gathering will take place when Covid-19 restrictions are lifted.

If friends and family so desire, donations may be made in Ernie’s memory to The Salvation Army.

Receive notifications about information and event scheduling for Ernie

We encourage you to share your most beloved memories of Ernie here, so that the family and other loved ones can always see it. You can upload cherished photographs, or share your favorite stories, and can even comment on those shared by others.

Posted Jun 03, 2020 at 07:43pm
Phyllis,
I haven’t been in touch for a number of years but I want to offer my sincere condolences for your loss.
Ernie skipped us for a few years at the Heather and we always won a few trophies. He taught me the finer points of curling . Besides being a very good skip he was also a good guy.
Connie passed away on March 12th this year also with cancer but we had a lot of great years together.
Lots of love,
Michael Stewart

Posted May 31, 2020 at 04:26pm
I was so saddened to read of Ernie’s passing. My condolences to Phyllis and all the family. I fondly remember dinners at Red Lobster and games of Wizard afterwards.
Comment Share
Share via:
KP

Posted May 31, 2020 at 12:26pm
To Phylis ,David and family
My thoughts and prayers are with you at this time of Ernie's passing. I have wonderful memories of the competion at the bridge table followed by many Saturday nights of socializing together.
Comment Share
Share via:
RB

Posted May 30, 2020 at 05:53pm
To Debbie, Mrs. Boushy & family - I was so saddened to read this. He was a total gem. I have many, many fond memories of growing up with Debbie, sharing in family occasions and going on family vacations to Manitoba. My heart hurts for you all. My thoughts are with you. Take good care of each other.
Ruth Buckton
Comment Share
Share via:
DB

Thanks so much Ruth!
ET

Posted May 30, 2020 at 12:26pm
A photo of Aunt Jay and Cousin Ernie from my father's photo album (Donald). My sincere condolences to Phyllis and family. 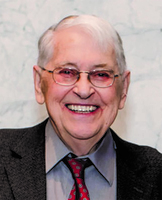