To share your memory on the wall of Ernest Cudby Jr., sign in using one of the following options:

Provide comfort for the family of Ernest Cudby Jr. with a meaningful gesture of sympathy.

He is survived by his son Brian (Tina), daughters Andrea (Gordon) Hunter, and Laurie (Ron) Hughes; grandsons Russell (Kait), Simon, and Mitchell; and great-grandchildren Greyson and Tenley Cudby; sister Jean Reedman of Spokane, Washington who turned 100 in August 2019; and many loving nieces and nephews, and extended family members.

Ernest's lovely wife Vivian Lavone, married to Ernest May 20, 1950 in Forest Lawn, California, predeceased him in 2005. They were afforded the opportunity to travel internationally and nationally which they loved to do together before Vivian passed. He was also predeceased by his parents, Sophia Bastow of Wibsey, Yorkshire, England, and Ernest Emery Cudby Senior of Farnham, Surry, England.

Ernest was born in Edmonton, Alberta on February 24, 1924. He received his primary education at King Edward Junior and Strathcona High Schools in Edmonton. His post school studies started at the University of Alberta, Edmonton in the Faculty of Engineering, and completed at the University of California, Berkeley in 1948. Ernest graduated in the Faculty of Petroleum Engineering following his return from a stint overseas in the British Fleet Air Arm as an Observer trainee. He also completed a post-graduate course in Fluid Mechanics at the University of Pennsylvania, in 1953. Overall he spent 40 years with Chevron Canada Resources and its predecessors in drilling, production, exploration, land to purchase evaluation, safety, and environmental studies and research, from the Atlantic, to the Pacific, to the Arctic, and all western provinces in between, ending his professional career to retirement in late1985.

Ernest was a past member of Calgary West (subsequently St. Mathew’s United Church), St. Andrew’s United Church, and latterly Red Deer Lake United Church. He served in a number of fulfilling capacities (including an early stint as a Sunday School teacher) in an essentially continuous period covering over 60 years. He was also a charter member, past President and Board member of Canyon Meadows Golf and Country Club in Calgary, where he saw and oversaw a lot of changes over his 65+ years of involvement.

Ernest lived a life, always concerned about the care and well-being of his wife, family, relatives and friends. He learned to believe that the life he lived was the life he was meant to live, and that God was there to see that he didn’t lose his way. There were many things he wanted to achieve that he considered very important before he left this earth. Among them were being able to speak to those who would be interested, in books, about the evolution of civilization, religion, politics, and the environment, and how they have shaped our lives and life itself. About this he had written much. He also wrote five books on the genealogy of his family name, and shared them with his befriended namesakes across five countries. He strived to live a life above the level of mediocrity; a goal only God will know if he ever made it. Ernest hopes to remain in the life of his family as a positive influence, to whom he leaves this loving message.

The family wishes to extend heartfelt thanks to Age Care Midnapore staff, Shawnessy Unit, for their loving care to our dad and friend.

We are planning a Celebration of Life for Ernie to be held later this year.

"Death is nothing at all. It does not count. I have only slipped away into the next room. Nothing has happened. Everything remains exactly as it was. I am I, and you are you, and the old life that we lived so fondly together is untouched, unchanged. Whatever we were to each other, that we are still. Call me by the old familiar name. Speak of me in the easy way which you always used. Put no difference into your tone. Wear no forced air of solemnity or sorrow. Laugh as we always laughed at the little jokes that we enjoyed together. Play, smile, think of me, pray for me. Let my name be ever the household word that it always was. Let it be spoken without an effort, without the ghost of a shadow upon it. Life means all that it ever meant. It is the same as it ever was. There is absolute and unbroken continuity. What is this death but a negligible accident? Why should I be out of mind because I am out of sight? I am but waiting for you, for an interval, somewhere very near, just round the corner. All is well. Nothing is hurt; nothing is lost. One brief moment and all will be as it was before. How we shall laugh at the trouble of parting when we meet again!

We encourage you to share your most beloved memories of Ernest here, so that the family and other loved ones can always see it. You can upload cherished photographs, or share your favorite stories, and can even comment on those shared by others.

Posted Jan 25, 2020 at 11:29am
Ernie and Vivian were the best neighbours for my parents, Jean and Eric Fay. Mom and Dad spoke often and fondly of the bridge nights and dinners and gatherings that the neighbour couples often had. After my Dad died, Ernie was so supportive and helpful of Mom while she continued to live in the Southwood house alone. He was a man of great intelligence and integrity and I'm sorry for your loss. Meredith (Fay) Miller
Comment Share
Share via:
KO

Posted Jan 24, 2020 at 05:12pm
I had the privilege of knowing The Cudby Family most of my life. Ernie and Vivian Cudby were a kind, loving and generous couple. Ernie was very well spoken and written, I will miss his hand written Christmas cards with his words of wisdom.
I am truly sorry for your loss, Kris Olufson
Comment Share
Share via:
DS

Posted Jan 22, 2020 at 01:15pm
Dad was a great man, well respected by family, friends and his peers. His devotion to his family was never ending. In his last few weeks he was asking if he'd be worthy of getting into heaven. If there was a line to get in, he would be at the head of the line. Dad, enjoy your time in the afterlife and we know you've been reunited with Mom which we're sure is what you were most looking forward to.
Be at peace.
Comment Share
Share via:
SL

Sid and I offer our sincere condolences to Ernie’s family. I had the privilege of working for and being mentored by Ernie in the early days of my career. He was a wise and patient boss and his positive influence extended well beyond the brief time I was at Chevron. Rest In Peace Ernie. Sincerely, Sheila Leggett 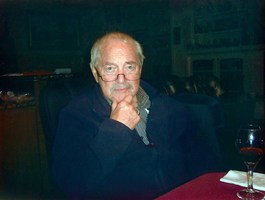