To share your memory on the wall of Eleanor Ness, sign in using one of the following options:

Eleanor was born to John and Davita Hartley, on June 8, 1931 in Moosomin, Saskatchewan. Eleanor was the second oldest in a family of eight girls. She took her schooling a... Read More
Eleanor Ness
June 8th, 1931 - Wednesday, January 8th, 2020

Eleanor was born to John and Davita Hartley, on June 8, 1931 in Moosomin, Saskatchewan. Eleanor was the second oldest in a family of eight girls. She took her schooling at Moosomin; and in her teenage years worked as a waitress in a local restaurant. It was in her teenage years that a tent known as "The Gospel Tent” was set up in Moosomin. It was then that the family came in contact with the gospel message. And as a result of a mother and children responding to the message, they attended Trossach’s Gospel Camp. It was at that time that I first met Eleanor as we were on a gratis list and worked together in the kitchen. It was at this camp that a deep desire for a greater relationship with the Lord came about. A record of this event is written in a book about Trossach’s Camp. It was during camp 1946, that a group of girls, including Eleanor, were leaving the after service prayer meeting and stopped on the foot bridge to pray. The said book calls it “the bridge party”, but it was a “bridge prayer meeting” and Eleanor was named as one that received the Baptism of the Holy Spirit that night. This experience had a great effect on her life. She then attended Eston Bible College where she met her husband, Alvin Ness. Little did I know at that time, that Eleanor and I would one day be brother and sister-in-law as I married Alice Ness, Alvin’s sister.

Alvin and Eleanor began life together on the farm at New Brigden, until Alvin's new job took them to Consort, Alix, Drumheller and lastly Calgary.

We have had a close relationship over the years. In fact, I recently looked at a card from Eleanor to Alice and she stated “you are like a sister to me”. Eleanor has been known for her friendliness, hospitality, loving relationship with her husband and children, and is best described in Proverbs 31. As her pastor for 23 years, I found her to be faithful, a good Sunday school teacher, involved in the Ladies Missionary Group, and one that took responsibility in making sure the church kitchen was fully equipped.

Eleanor was predeceased by her parents; sister, Elva, and a young sister Leslie. And recently, the love of her life, her husband Alvin. She being the oldest of the girls, was often called “Mom” by her sisters, Clara, Grace, Flora, Mona, Jackie. Her children, Bev Ness (Gloria), their four sons, Troy, Sheldon, Joseph, and David, Wesley Ness (Lynn) and their four children, Christie, Jackie, Ryan, and Arika. Cheryl Switzer (Paul) and their three sons, Cody, Levi, and Keenan. And a number of great grand-children.

She will be deeply missed by her family and many friends. As a word of comfort to the family, something that has been a great source of help to me is that the hurt of the loss of the loved one will subside over time, but the memories will last forever. So live on the memories for great comfort.

Eleanor passed away peacefully with her children and grandchildren by her side at the age of 88 years on January 8, 2020.

We encourage you to share your most beloved memories of Eleanor here, so that the family and other loved ones can always see it. You can upload cherished photographs, or share your favorite stories, and can even comment on those shared by others.

Posted Jan 17, 2020 at 11:22am
After 1st year Bible school I ended up in Calgary with nowhere to go, and no job. I went to Forest Lawn Full Gospel Church and Alvin and Eleanor took me in. I found a job and they found me a basement suite. I didn't have a car. I didn't have job experience and I didn't have money for food. Eleanor made me feel like I was one of her kids. Their family's willingness to help a stranger has inspired me to do the same. Bob and Alice Wilson married us 42 years ago and I work with a 150 kids, some like me, that just need to know somebody sees them and cares. Your legacy of love is being passed on and paid forward and I will see you soon and tell you all the people who were loved because you took a chance and loved a broken Saskatchewan girl like me and many others.Love to the family and prayers as they will miss your loving arms and presence here so much!! Love Marlyn and Dave Brunning
Comment Share
Share via:

Posted Jan 13, 2020 at 11:51am
My deepest sympathies to the entire family!! You all have been like family to me and your Mom and Dad for some fifty years! I’ve looked after many of your children and have a close bonding to you all. You are all the most compassionate, caring and loving family that I have experienced! What a Godly heritage to be part of a family such as yours! Heaven is richer with your Mom and Dad there along with Auntie Alice and many others we love so much but my life will never be the same without her, and I’ll miss her so much, but until then...with joy I’ll l carry on !! My prayers are with you all! Much love, Auntie Lee.
Comment Share
Share via:

Posted Jan 12, 2020 at 06:47pm
Hard to believe that I met Aunty Eleanor 50 years ago. She would have been 33! Young and Vibrant. She always welcomed anyone and everyone into her home. Her home was my second home... I spent many weekends there with Cheryl .... times spent at the Ness residence are precious memories.... too numerous to share.
Summers at Mara Lake... more treasured memories. Being part of the Ness clan brought many special people into my life....again, too many to mention. What a legacy She and Uncle Alvin have left behind! All who knew her were blessed by her. Thank you for putting up with all of our antics and helping to shape the person I grew up to be. It brings me joy to know you are reunited with so many who have gone before you and to know that we will see you again.
Jackie Roy
Comment Share
Share via:
SF

I was first introduced to Eleanor's kindness and her welcome home as a church intern in 1982. She and Alvin took me under their wing and gave me help and hospitality. We continued our friendship over the years and enjoyed visits at Veteran camp in their trailer. Eleanor was so gifted at making you feel comfortable to sit at her table and share your heart. She continued giving hospitality to many of the Eston College students over the years. Brian and I are so grateful for the friendship and want all of the family to know how much she and Alvin meant in our lives and ministry. (Shelly Fuller) 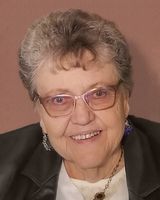