To share your memory on the wall of Edward Walden, sign in using one of the following options:

It is with great sadness, that we announce the passing of Ted Walden at the Peter Lougheed Hospital on Monday, November 9, 2020 at the age of 83. Ted was born in Calgary and lived here his entire life.
... Read More
Edward (Ted) Llewelyn Walden

It is with great sadness, that we announce the passing of Ted Walden at the Peter Lougheed Hospital on Monday, November 9, 2020 at the age of 83. Ted was born in Calgary and lived here his entire life.

He was well known in the Calgary Construction Association where he was on the Board of Directors. Ted worked as a carpenter for many years and in later years, he worked for Jensen Masonry as an Estimator.

Ted is survived by his wife, Irene; son, Warren; grandchildren, Bridget and Chase; sister, Eleanor; as well as stepchildren, Wayne (Shelly), Bonnie (Joe) and Rhonda (Rick); numerous nieces and nephews, step- grandchildren and step-great grandchildren. He was predeceased by his parents, Edward and Doris; sister, Marnie and stepson, Brian.

Posted Nov 16, 2020 at 11:13am
I would like to extend my condolences on your loss of Ted Walden. My name is David Thomas and I believe my father, Geoff Thomas knew his father, Edward (Ted) Walden of Walden Construction. I believe the senior Ted Walden was a member of the Calgary Welsh Society (St David’s Society) and that is where they met. As a young boy I met the senior Ted at society parties mostly out at Bragg Creek with our friends, the Loney’s. Though Ted junior may have been at these parties as well I sadly do not remember him. I am still friends with the Loney’s son who still remembers being taken by the senior Ted in a gold? Cadillac to see the Calgary Zoo Conservatory which Senior Ted built.
So for years I have kept three lovely paintings of senior Ted’s that my father were either given or purchased from him. Two are of the Rockies west of us and one was of a scene from Italy, I think. They are all 6.5” * 10” and one is dated 1963. I have always hoped that I would be able to return them to a Walden family member, as they are quite nice. If a family member would like to have them for free I would be willing to meet with them at their convenience. My phone number is 403-289-1911.
Please forgive me for intruding on your loss. May this time of grieving be a time for family and fond memories.
Comment Share
Share via: 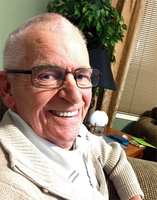