To share your memory on the wall of Edward Protheroe, sign in using one of the following options:

Ted Protheroe passed away peacefully at home supported by his loving family and caregivers. He is survived by his wife of 63 years, Doreen; two children, Geoff (Eleanor) and Joy (Michael) Egilson along with g... Read More
Protheroe, Edward “Ted”

Ted Protheroe passed away peacefully at home supported by his loving family and caregivers. He is survived by his wife of 63 years, Doreen; two children, Geoff (Eleanor) and Joy (Michael) Egilson along with grandchildren, David, Stephen and Amy Protheroe, and Stefan, Aren and Megan Egilson; nephew, Loren Dawe and niece, Alayne (Reg) Steward. He was predeceased by his parents, Rupert and Dorothy, as well as siblings, June Protheroe and Gwen (Alan) Dawe.

Ted was born in Vancouver and was deeply attached to the sea as a youth, living on the Vancouver waterfront. He was a junior member of the Royal Vancouver Yacht Club, building and racing two sailboats as a teenager. During summers, he worked on his father’s sea-going tugboat. He was somewhat of a ruffian and had an adventurous and eventful youth, attending three different high schools, the last of which was Vancouver College. He attended Broadway Tabernacle and its youth group, where his charming good looks caught the eye of his future wife Doreen. After a lengthy courtship, they married in 1956 and relocated to Victoria.

By this time his interests had shifted somewhat to aviation. He apprenticed as a mechanic with Trans-Canada Airlines, and later accepted a position with Vancouver Island Helicopters as their first Chief Engineer. In 1959 he and Doreen relocated to Burlington, Ontario where Ted obtained his flying license and then trained as a rotary (helicopter) pilot; his first helicopter work was flying for Pegasus Airlifts. His children were born there, Geoff in 1959 and Joy in 1962. Subsequent years were marked by prolonged periods of absence while he flew in northern Ontario. In 1965 the family moved to Calgary, where Ted continued working as a helicopter pilot, now for Sproule and Associates, but this continued to involve long periods of time away from home, once for seven uninterrupted months. This work often took Ted into the high arctic, which he loved very much. However, this was not conducive to a healthy family life, so in 1967 Ted moved to Klondike Helicopters as their Office Manager, still flying up north in the summertime on occasion. He remained with Klondike (later part of Kenting Aviation) until 1975 and in the latter 1970s worked for a few different companies before ending up with his own company Protheroe Aviation which brokered business assorted aircraft, not an easy task when the National Energy Program had been introduced.

In 1978 Mission Aviation Fellowship asked him to join their Board, and he served for seven years, six of which were as the President. Toward the end of this time, it became apparent that MAF would benefit from having a fulltime Candidate Secretary, a job Ted accepted with enthusiasm for the remainder of his working life, retiring at age 65 in 1993. He then returned to the MAF Board and remained actively involved with MAF for the next 20 years.

Retirement life involved another shift in attention, this time to the family cottage on Keats Island, BC. Ted and Doreen expanded the cottage in 1994 and spent most of their summers for the remainder of his life carefully tending the cottage, maintaining and improving it, and helping out in the local community wherever possible. He had a Laser sailboat and could return to sailing, the passion of his youth.

As years progressed, physical limitations progressively restricted his mobility and activity, but Keats remained an important part of his life, even up until the summer of 2019 when he spent three weeks there.

His love of his family was second only to his love of the Lord Jesus Christ.

In lieu of flowers, donations may be made in Ted’s memory to Missionary Aviation Fellowship Canada 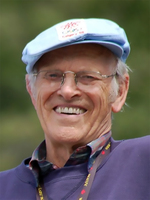 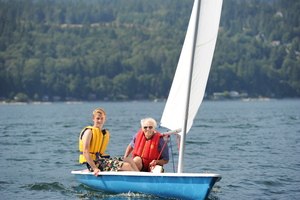 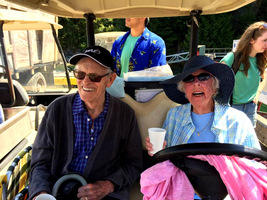