To share your memory on the wall of Douglas Henwood, sign in using one of the following options:

Doug Henwood passed away at the Peter Lougheed Hospital on Tuesday, March 24th at the age of 86. He was born in Springhill, Nova Scotia into a large family of 13 children during the d... Read More
Douglas Henwood
April 2, 1933 - March 24, 2020

Doug Henwood passed away at the Peter Lougheed Hospital on Tuesday, March 24th at the age of 86. He was born in Springhill, Nova Scotia into a large family of 13 children during the depression. His family was poor and he followed the family tradition of working in the coal mines. He was trapped underground during the 1956 “bump” and didn’t come back up for 3 days. This was a pivotal time for Doug, as he realized he couldn’t go back down into the darkness again. He moved his young family west to Alberta within a short time to make a new start.

Doug found work in a service station and spent many years managing and owning stations around Calgary. About 1980, he changed professions and established himself as one of the very best car salesmen in Canada right up until his retirement. He thoroughly enjoyed the horse races at Stampede Park in Calgary and spent many weekends there indulging his passion. He brought his oldest son Doug along on many occasions and passed the love of horse racing on to him.

The last 5 months were a physical and emotional challenge for Doug with first a stroke, followed by the news of bone cancer and a failing kidney. With his son Tom by his side, Doug was in and out of hospital until the last month of his life when his son Tom along with his wife Stamatina and their daughter Rachel, opened up their home to him and took care of his every need right up until the end when he had to be hospitalized again. It was a great gift to Doug to have some much needed and loved family time during his last month.

Doug leaves to mourn 5 children, Doug (Cindy), Debbie, Linda (Rich), Tom (Stamatina) and John (Denise). He was blessed with 7 grandchildren; Jodi, Jamie, Bobby (Kallie), Tyler (Amber), Rachel, Evan and Brent. He also leaves behind 3 loving sisters, having been pre-deceased by 9 of his siblings. Missing and loving him are Patsy (Pete, pre-deceased), Darlene (Butch) and Judy (Al) along with numerous nieces, nephews and friends. As per Doug’s request there won’t be a funeral or memorial service. He will be cremated and his ashes will be given to his children. In lieu of flowers, friends and family are encouraged to donate to the Heart and Stroke Fund.

Receive notifications about information and event scheduling for Douglas

We encourage you to share your most beloved memories of Douglas here, so that the family and other loved ones can always see it. You can upload cherished photographs, or share your favorite stories, and can even comment on those shared by others.

Posted Jul 12, 2020 at 01:19pm
Hi dad it’s been a long time since I have seen your face and boy do I miss you love you dad and hope we meet again love your buddy and son Tom. Xoxo
Comment Share
Share via:
T

Posted May 22, 2020 at 01:26pm
Hi dad it’s me and Caesar here every time I go over in the morning to say hi to your ashes Caesar stands up at the table where you are until i am done we love you and really miss you and he misses your terrible throws of your sock or his Kong ball.
Comment Share
Share via:
TH

Posted May 15, 2020 at 09:15am
Well dad it is may 15th and not a day goes by without me finding myself thinking about some of the fun times we had together. I love you and I miss you. Love Tom
Comment Share
Share via:
SR

Posted Apr 03, 2020 at 07:32pm
Goodbye for now Uncle Dougie - but not forever. See you again in Heaven one day. Give hugs to everyone in heaven for me - the list is sadly way to long To all of your family - I am so sorry for your loss may God wrap his arms around you in contort. I was so glad that Uncle Dougie and my mom could spend some special time together. Love Lina
Comment Share
Share via: 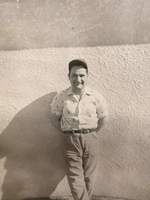 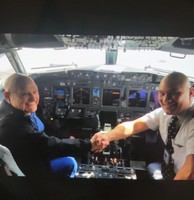