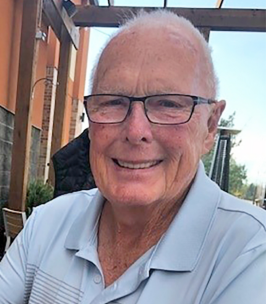 Doral Douglas passed away on Wednesday, November 9, 2022 at the age of 78.
He was born to Charles and Alice Douglas in the Brooks Hospital in the first year it was built, in 1943.

Survived by his loving wife, Ilene; their son, Ben and his children, Jackson and Isabelle; their daughter, Jodi (Jeff) Bradford and their two children, Jasmine Bradford (Derrick) and Jesse Westwick (Brett); four great grandchildren, Jase, Zoey, Avery and Cole; sister, Donna Farney and her daughter, Darcie. Doral was predeceased by his parents, Charles and Alice and by his nephew, Todd.

As a young man, Doral was very active in the local 4H club, raising many prize-winning steers. He played softball, basketball and excelled at any sport he decided to challenge. He attended an agricultural program at Olds College. It was during that time that he met his future wife.

Shortly after his marriage in 1967, Doral took over the family farm. He was a very progressive farmer and the first in the area to utilize a PIVOT sprinkler. He raised prized polled Herefords and was known in the area for his quality herd. He was always looking for new opportunities which led him to successfully experiment with leading edge crops such as field peas and canola.

Doral was an inventor. If you could show/draw him a picture, he could build it. In the early 80’s he built 3,200 sq ft house on the farm which stands to this day. He built another building on the property which was known as THE DOUGLAS COUNTRY INN.

In 1997, Doral and Ilene moved to Vancouver Island where they stayed for approximately 15 years. He kept himself busy renovating houses and worked at two golf courses. He made new friends which he maintained right up to his passing. In 2012 Doral and Ilene moved back to Alberta for a short stay on an acreage outside of Rocky Mountain House and then Red Deer for four years. In 2019 they moved to High River.

Some of his accomplishments, other than his family, whom he loved and was extremely proud of were:
- had his pilots license at the age of 20
- built a 22’ ocean going wooden boat
- enjoyed woodworking making tables for friends and family
- got into silver smithing and made beautiful jewelry which he mainly gave away to friends and family
- he played fastball for many years, curled extensively and then became a designated super fan when his kids were in sports.
- travelled far and wide to many parts of the world and made new friends every where he went. Some of these friendships he nurtured for 50+ years.

A more kind and loving man you could not find. Honest to a fault and would give you the shirt off his back. He will be missed by all who had the privilege of knowing him.

As per Doral’s request, there will be no Funeral Service however, a Celebration of Doral’s Life will be held at a later date.

In lieu of flowers, donations may be made in Doral’s memory to Canadian Cancer Society or to Heart and Stroke Foundation.

To view and share photos, condolences and memories of Doral, please visit www.choicememorial.com.