To share your memory on the wall of Dean Desrosiers, sign in using one of the following options:

It is with great sadness that we announce the sudden passing of Dean Desrosiers of Calgary, Alberta on March 12, 2020 at 60 years of age.

It is with great sadness that we announce the sudden passing of Dean Desrosiers of Calgary, Alberta on March 12, 2020 at 60 years of age.

Dean was born in Winnipeg, Manitoba on July 29, 1959 and moved to Chateauguay, Quebec when he was 2 years old and lived there until he ventured out on his own at age 17. He lived and worked in Edmonton, Alberta and Northern Alberta until 1988 when he moved to Calgary, Alberta to be with his girlfriend. He decided to go back to school and obtain his plumbers/pipe fitters ticket and enjoyed that field of work for many years until he suffered a brain injury in 2010. Since 2011, Dean has resided at Garrison Green Care Home in Calgary.

The things Dean enjoyed the most were his family, friends, playing golf, hockey, drawing and telling jokes. He was always witty and enjoyed making people laugh.

Dean can now be free to walk, something he strongly desired during his last 9 years on earth. He will be forever missed by all.

In lieu of flowers, please make a donation in his honor to the Association for the Rehabilitation of the Brain Injured at ARBI Donate.

A Celebration of Life will be held at a future date.

Receive notifications about information and event scheduling for Dean

Donations are being accepted for: THE ASSOCIATION FOR THE REHABILITATION OF THE BRAIN INJURED.

We encourage you to share your most beloved memories of Dean here, so that the family and other loved ones can always see it. You can upload cherished photographs, or share your favorite stories, and can even comment on those shared by others.

Posted Jun 15, 2020 at 02:32pm
A few years ago, I became a regular visitor to Dean at Garrison Green, through a Canadian Mental Health Association volunteer program. We'd regularly watch Flames on Hockey Night in Canada, go to restaurants like Boston Pizza, shop at a bookstore — even went to a Hitmen game together once. I enjoyed his jokes and the glisten in his eye when he was happy. During a major change in my life I lost touch with him, and then only this week heard the tragic news. The sentiment in his obituary about him now being free to walk: it's a lovely thought that I will keep with me. My condolences to all who knew him and are warmed by his memory. — Jason Markusoff
Comment Share
Share via:
AG

Posted Apr 01, 2020 at 11:54am
I am so very sorry for your loss. My late husband, Gary Parker, and "Deano" were very good friends. Dean was a very fun loving, compassionate, caring man. He was so very talented with anything that he did. We were good friends of Dean and Kathy's. We lived in Edmonton, but anytime that we were in Calgary, we made a point of stopping in and visiting them/him. Sometimes that was the main reason to be in Calgary. Gary and Dean were good friends and then roomies for awhile. Gary used to have such fond memories of those happier times, and great stories... I'll have a smile on my face thinking of those stories and my own memories from our friendship with him. Gary and Dean are definitely in heaven running around like kids and having fun as friends like they've never been parted. God bless them. You will be in my prayers, may your memories comfort you in time of need.
Sincerely,
Angela Golding-Parker
Edmonton AB
Comment Share
Share via:
LG

Thank you Angela, yes they sure did have some great memories together. I have some fond ones myself when Kathy and I visited Dean and Gary when they lived together. We will miss Dean very much. Dean's sister, Lindy
L

Posted Mar 20, 2020 at 11:08pm
My Condolences to Dean’s family during this time. Free to walk and continue to share his humour.
Lorna 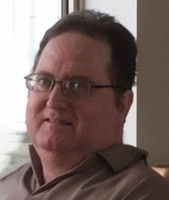