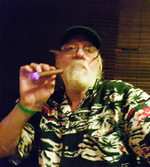 On Wednesday, November 27, 2019, Davy Jones passed away in hospital in Calgary, Alberta. He is survived by his six children, Sheena, Cory, Julie, Kelsey, Amy, and Max; his brothers, Trevor (Janet) and Arthur (Anne); his granddaughters, Abigayle, Elizabeth, and Illianna, and many nieces and nephews. He will be joining those who passed before him, his wife, Kaye and sister, Sheena.

Davy worked for decades as a chemical engineer. He immigrated to Canada from Scotland in his 30s. He is known for his sense of humour, storytelling, and appreciation of lively debate. He shared his love of music, curling, and politics with his family. He will be missed.