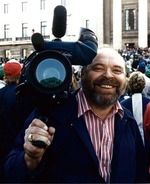 After a complicated medical history over the last seven years, Cliff Liebrecht of Okotoks, AB passed away peacefully in the arms of the love of his life, Mabel on March 17, 2020.

Cliff was born in Stornoway, SK on December 11, 1940, eldest child of Theodore Wilhelm Liebrecht and Elsie (nee Wiedemann). He grew up with his two younger siblings Calvin & Byron on his parents’ farm. After graduating high school at Yorkton Collegiate in 1959, he moved to Regina where he began a career in television with CKCK until 1965. Though he started in the props department his aptitude to learn, creativity and talent was recognized and had him quickly climbing the ranks at the station to Sound-man and later Camera-man.

On June 10, 1961 Cliff married his high school sweetheart, Mabel Kuryluk, at Trinity Lutheran Church in Stornoway, SK. They began their married life in a little apartment in Regina where they welcomed their son, Gregory Glenn in 1963. They later had a daughter, Dena Kerilynne, in Winnipeg, MB in 1970.

Cliff accepted a promotion with the CBC in 1965 and moved to Winnipeg, MB where he began a rewarding 35 year career as ENG Technician (aka Camera-man) with the 24 Hours News Team. They were temporarily relocated to Montreal, PQ for 14 months as part of a special CBC media team covering Expo ‘67. In addition to this demanding news career, Cliff was also sought after for freelance jobs with the National Film Board and other private filmmakers. These opportunities had him traveling throughout Canada and internationally to USA, England, Germany and Turkey, meeting royalty and celebrity alike.

Cliff was a family man and took providing for his family seriously whether in extra cash through over-time/freelance jobs or venison in the freezer. Vacations were often visiting extended family mostly in western Canada, fishing in the boat they shared with his parents on Lake Winnipeg and The Whiteshell, or deer hunting. He and Mabel often entertained friends and family around their generous table, sharing their infamous homemade wine often paired with something he expertly BBQ’d (even in -40C) and almost always followed by a game of Canasta or Cribbage. Because of his talented eye, he was also often called on to be behind the camera documenting memories made at private social gatherings.

Cliff & Mabel retired modestly in 1996 where he proclaimed he wanted “ten good years” to travel and enjoy their time together, however they were blessed with many more. They spent the majority of their retirement traveling from coast to coast in Canada in their various RVs over the years with a couple of small trips to the USA. Cliff always said that Canada had plenty to offer so why would he go anywhere else?

After 43 frigid Winnipeg winters they moved to Okotoks, AB in 2011 be closer to their daughter and to relish the milder winter wonder of chinooks. Though it was more difficult after losing his right leg in 2015, they continued to enjoy RVing in the prairies, the mountains and one last trip to Ottawa in the summer of 2019.

To know Cliff was to love him for his loud, infectious laugh. Random children thought he was Santa Claus because of his life-long beard, especially as he aged and it became more salt than pepper. He was fiercely loyal to those he loved and always had the respect of those who knew him. He was a snappy dresser and was always an old-school gentleman. However Cliff was also opinionated and needed to do things his way, even through his decline in health and in the way that he passed away. He concerned himself with always “doing the right thing” and despised cheaters and scammers, taking up crusades to defend those taken by such cads. If you wanted to spar he would welcome the opportunity to share his many insights on Trudeau or Trump, why Volkswagens were the best even if they did mess up on the emissions thing, or why Dodge Rams were infinitely and always the superior truck (especially compared to Fords). While still in their Winnipeg house he would spearhead home renovations, tinker in woodworking creations or re-invent something he just bought that the manufacturer had somehow not made exactly correctly. He proudly kept his vehicles in top notch shape — one in particular was his classic ebony black 1965 Chrysler Saratoga 300 that was used many times as the Bride/Groom vehicle for family & friends.

As his health declined his smile also faded and his laugh wasn’t quite as robust as it had once been, however being smooched by one of his two grand-dogs could always bring him out of his gloom no matter how deep. While he will be greatly missed we are grateful that his struggle has ended and he is now finally at peace.

Cliff was predeceased by his father Ted, his mother Elsie and his brother Byron. He is survived by his wife Mabel (nee Kuryluk), his son Greg (Tracy), his daughter Dena, his brother Calvin, and many nieces and nephews.