To share your memory on the wall of Clayton Undseth, sign in using one of the following options:

Clayton Tenneson Undseth, born July 20, 1927, went home to be with the Lord November 9, 2020 in Calgary, Alberta. There will be a ‘Celebration of Life’ graveside memorial service held in conjunction with the passing of his loving wife at St. John Lutheran church in Fosterton, Saskatchewan in June of 2021.

Clayton, the youngest son of John and Ida Undseth, grew up on their family farm with his siblings Esther (Cob), Sid (Margaret), Oscar (Bernice), Irene (Fred Bateman), Opal (Bill Thomson), Kenneth (Marybelle), Merle (Iris), Irwin/Buster (Bertha), Jean, and Evelyn (Clarence Arnelien). Clayton was the longest living member of the John Oscar and Ida Undseth family, and is survived only by Buster’s wife Bertha, the only living in-law. Clayton is also survived by many nieces and nephews.

Clayton Undseth was born in Cabri, SK. He achieved his schooling in the one-room rural country school district of ‘Mistletoe’. Clayton’s five brothers and one brother-in-law all farmed in the same community in southwestern Saskatchewan, and maintained a loving, supportive bond throughout their working careers. While known for his stellar work ethic, Clayton always put his family and friends first with his “you-matter-to-me” approach to life.

Clayton and Bernice were married on June 8, 1948. They raised their family on the farm. After retirement they moved to Creston, BC for 12 years before settling back in Calgary in 2001. Over the years they both enjoyed spending time with family as well as camping and traveling throughout Canada and the US. Their enthusiasm to visit and help others continued as they shared Clayton’s ability to ‘help and fix-it’ whatever the need, and Bernice’s handcrafted crochet and works of art.

Receive notifications about information and event scheduling for Clayton

We encourage you to share your most beloved memories of Clayton here, so that the family and other loved ones can always see it. You can upload cherished photographs, or share your favorite stories, and can even comment on those shared by others.

Plant a Tree in Memory of Clayton
Plant a tree 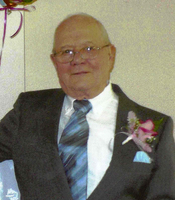