To share your memory on the wall of Christopher Harris, sign in using one of the following options:

Provide comfort for the family of Christopher Harris with a meaningful gesture of sympathy.

Chris spent his youth in boarding schools or travelling with his family due to his father’s role in the British Forces. He joined the 1st Royal Green Jackets at age 17, during which time he continued to travel. Whilst posted here in Calgary in 1969 he met and later married his wife Barbara, with whom on Oct 25 this year they celebrated their 50th Golden Wedding Anniversary. He retired from the army at the rank of Warrant Officer Class 2 in 1984 whilst posted in Oxford England. Chris and his family remained in Oxford, where he worked as a coordinator for 18 Plus Groups, and later he became the manager at Green Park with Bucks County Council. In 1998 Chris and his wife emigrated to Calgary Canada. Shortly after emigrating, he became the CEO of the Calgary Food Bank where he was recognised for restructuring the charity and reaching out and helping many, both clients and staff. He retired from the Food Bank in 2007 at age 63. He spent his retirement years immensely enjoying spending time with his grandchildren and family, travelling with family and friends and continuing his membership and participation with Cosmopolitan International Club of Calgary through which he and the group supported many other charities and organisations.

Chris is known for many things, his plain, forthright and honest personality, his wit, humour and the twinkle in his eyes and his exceptional clear thinking, planning and organisational skills. He is also known for his love of gardening, reading, history, archaeology and travel, so much so, that on his travel adventures with family and friends it was often remarked “What pile of rocks are we interested in today Chris”. More than this, Chris is also known for his loyalty and love of family and friends, his love of good Brandy which if you were lucky, he would share with you on his good days. He was a big man, in both stature and heart, and in the early days, he was known for intimidating many of his daughter’s prospective boyfriends. Of course, this list would not be complete without spending time mentioning his rather exciting and charismatic eyebrows, through which he would look at you and the look could range from deep disapproval through to complete pride and love, but good luck working it out. If anything, Chris liked to keep things interesting.

We would like to share some of the condolences and tributes that his family have received as it speaks volumes as to how much Chris was loved and respected:
“Your dad was a magnificent man”
“He was a strong person with so many fine qualities”
“Strong-willed”
“So humorous”
“So many stories”
“A rock”
“A legend”

Chris’s family would like to express their heartfelt thanks and gratitude for all the thoughtful expressions of love and kindness by relatives and friends during their time of loss and bereavement. Special thanks to Terri and Jack Jessop, Greg and Priscila Snider, and to all the nurses, doctors and staff at both Sarcee Hospice and the Peter Lougheed Hospital especially unit 38.

In lieu of flowers, if you so wish, memorial tributes can be made directly to a charity of your choice, or to the charities that Chris supported over his years: The Calgary Food Bank, Woods Homes, Hull Homes, The National Trust UK, UK Heritage Fund, or any local library.

Chris will be deeply, deeply missed.

We encourage you to share your most beloved memories of Christopher here, so that the family and other loved ones can always see it. You can upload cherished photographs, or share your favorite stories, and can even comment on those shared by others. 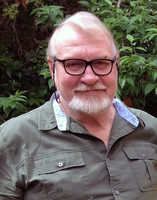