To share your memory on the wall of Carl Folkins, sign in using one of the following options:

Carl had a passion for fun, loved to entertain and have a party. Happy hour was never turned down whether at his home in Calgary or at his second home in Yuma, Arizona. Carl could tell a story like nobody else and had endless tales of adventure and mischief.

Carl was a truck driver for 46 years and proud owner/operator of CWT Carriers for 10 years. His work took him all over North America; he could talk to everyone and anyone along the way including a visit Johnny at the Cash farm in Nashville as well as having a drink in the back of a gas station with George Jones.

Carl loved live music and loved to dance, take Jeep trips to the desert, or play golf with all the wonderful friends he made throughout his life. One of Carls favorite things was R&R rye, to which he joked he was for sure not rich, but he was definitely rare.

A Celebration of Carl’s Life will be announced at a later date. In lieu of flowers, donations may be made in Carl’s memory to the Salvation Army.

Receive notifications about information and event scheduling for Carl

We encourage you to share your most beloved memories of Carl here, so that the family and other loved ones can always see it. You can upload cherished photographs, or share your favorite stories, and can even comment on those shared by others.

Posted Aug 28, 2020 at 04:22pm
Sharon and Families : so sorry to hear of Carl's passing thinking of you all as you journey through this time of loss, Cherish all the wonderful memories you have made.
Comment Share
Share via:
RB

Posted Aug 27, 2020 at 03:18pm
Met Carl years ago with my brother jim. Great guy. Have stayed in contact over they ears bu the Facebook. When he wasn’t kicked off. Lol. My condolences to all his family. R I P. MY FRIEND. ROGER
Comment Share
Share via: 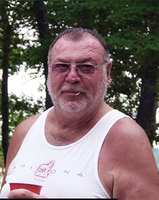