To share your memory on the wall of Bryan MacLean, sign in using one of the following options:

Bryan Donald MacLean passed away at the age of 61 on Friday, June 5, 2020 at the Peter Lougheed hospital with his son by his side.

Bryan Donald MacLean passed away at the age of 61 on Friday, June 5, 2020 at the Peter Lougheed hospital with his son by his side.

Bryan was an excellent artist and also loved working on cars. His mom found him under a car trying to work on it with a stick at the age of two. Above all, Bryan loved riding his motorcycles; this was his passion. He loved going on long rides through the Rocky Mountains on his Harley.

He will be dearly missed and in our hearts forever. To view and share photos, condolences and memories of Bryan, please visit www.choicememorial.com.
Read Less

Receive notifications about information and event scheduling for Bryan

We encourage you to share your most beloved memories of Bryan here, so that the family and other loved ones can always see it. You can upload cherished photographs, or share your favorite stories, and can even comment on those shared by others.

Posted Jun 29, 2020 at 02:55am
To Rose Maclean( Mother of Bryan Donald Maclean who passed on June 06@ 6pm 2020). My heart goes out to you, I am so, so very sorry for your loss. Words cannot begin to describe the hurt I feel in my heart for you, we will always remember all the wonderful memories we all shared on the east and west coast. Your son will forever live on through your grandson and great granddaughter. Please accept my sincere condolences and may God sustain you in your time of need. I love you very much.
Comment Share
Share via:
AS

Posted Jun 11, 2020 at 03:19pm
I love you forever and always will hold you in my heart. you will always be my little boy. your loving mother Rose Maclean.
Comment Share
Share via:
AS

Posted Jun 11, 2020 at 01:26pm
My old friend Bryan, your son, granddaughter and I have lost you way too soon. You will live on through your son and granddaughter. the memories we all shared together will forever be in our hearts. Throughout your life you were quite proud of your Scottish decent and it showed through in your attitude and actions. Be@ peace and know we miss you with every breath we take. Forever on our mind and always in our hearts. Rohini Maclean
Comment Share
Share via:
AS

In the 25 years ive known you Bryan, ive developed a lot of respect and love for you. so very sad your gone but want you to know I will always be there for your son,' my stepson 'and granddaughter. love, and rest in peace. 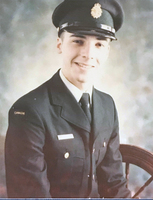