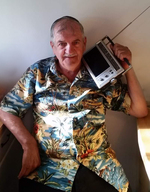 Brian did not wish to have a service after his passing. However, his children will gather at the Choice Memorial Cremation and Funeral Home on Wednesday, March 25, 2020 in Calgary, Alberta to say goodbye.