To share your memory on the wall of Brian Cook, sign in using one of the following options:

Provide comfort for the family of Brian Cook with a meaningful gesture of sympathy.

It is with deep sadness that our family announces the sudden passing of Brian Harry Cook on July 3, 2019. Brian was born in Calgary, Alberta on March 5, 1962. At only 57 years of age, he suffered from a massive heart incident.

Brian is survived by his wife, Debbie of 31 years; son, Quinn (Hayley); daughter, Morgan (Russell) and their family cat Tigs; brother, Gord Cook (Cindy Nanhybida); and brother, Mike Cook (Moe). Brian also leaves behind many beloved nieces, nephews, other extended family members, and friends who will miss him dearly. He was predeceased by his parents, Lois and Lloyd Cook.

In 1962, Brian was born to his loving parents Lloyd and Lois Cook. He was the middle child of the three, between the older brother Gord and younger brother Mike.

Brian grew up in Bowness and attended Bowness High School. Brian loved many sports, and learned early to be a team player. Specifically, he was a part of the Bruins bantam AA division city champions. The hockey magazine article covering the championship game read that Brian was “A very speedy winger who can break fast, give and take a lot of abuse.” While attending Bowness High School Brian was one of 6 team captains of the Bowness High School Trojan senior football team, as well as on the badminton team. He was a pitcher that was part of the Western Softball Championships in 1979.

After high school, Brian attended a 3-month tour of Europe. He spoke of the memories of this trip fondly. Telling stories of the drinks and food, or how he managed to get into trouble in almost every country. On this tour, they would award an individual a rubber ducky at the end of each day for silly mishaps. The winner had to wear the rubber ducky the next day. This was a common fashion accessory for Brian during his 3-month adventure.

After returning back to Calgary, he began working with a childhood friend’s father’s company in the bulk bag industry. This opened many doors for Brian.
On August 5, 1988, Brian married Debbie Switzer at Bowness Park. To celebrate they floated down the Bow River in an inner tube. They were blessed with two children. His first born, Quinn, who arrived in September of 1990 and his second born, Morgan, who arrived in January of 1996. Brian always spoke of his children with such love and pride.

Brian eventually became the production manager at Trimeg. He worked 23 years with them, learning the trade and the business. In 2002- 2004, the whole family moved to Saigon Vietnam where he formed several long-term relationships, both personal and business.

In December of 2005, Brian opened his own bulk bag manufacturing company. BWI means (Built with Integrity) or as we all joked, (Brian with Ideas). In which he was always thinking, rearranging, organizing and more thinking. He was married to his work so to speak. There was rarely a moment he would not take a phone call and it showed, as he built the company to what it is today.

Travelling was another love of Brian’s as he enjoyed meeting new people and friends from around the world. Business took him to Vietnam, India, China, Australia, South Korea, the United States and across Canada. Downtime and relaxation led him to purchase property in Los Barilles, Mexico, where he still worked remotely.

The generosity of Brian shined through almost daily. He would gladly leave a huge tip to a wait staff, financial help to a friend that may have been struggling, make donation bags for the food bank, giving thoughtful gifts, helping his brothers with painting fences, building decks or moving big boulders, volunteering at fundraising events, and lastly in his final moments on this earth, donating his organs to help someone else in need.

It seemed Brian’s brain was working 2 or 3 steps faster than most of us. But as Brian would say, the past was ancient history, the present is almost the past and “moving forward” let's focus on the future. “I have no ill feelings to anyone”

Moving forward we will all most certainly miss the big happy generous guy.

In lieu of flowers Brian would of wanted a donation to go to Chestermere Food Bank, or Calgary Food Bank.

We encourage you to share your most beloved memories of Brian here, so that the family and other loved ones can always see it. You can upload cherished photographs, or share your favorite stories, and can even comment on those shared by others.

Posted Jul 21, 2019 at 01:10am
Dear Deb and family,
So sad to hear about my good friend and business associate . We hit it off great over 30 years ago. We had so much in common. Brian with Ideas, and Bob with Ideas, not all good, lots of them hairbrain, but that's the thing about Brian, he was not scared to try anything. This contributed vastly to his success. I will miss my good friend dearly.

Our family is sending you and your family our deepest sympathy and condolences.

Posted Jul 20, 2019 at 07:49am
My husband Tom and I were fortunate to know Brian and Deb from the wonderful winters we spend in Baja. We are so very sad and shocked to hear that Brian died suddenly. His big smile and warm and welcoming way helped make this world a much better place. Deb sending a big hug your way. We wish we could attend the memorial, but I just had my other knee replacement. Please know that you are in our thoughts and prayers. Sharon and Tom Gohman
Comment Share
Share via:
DV

Posted Jul 16, 2019 at 02:59pm
Dear Brian,
It is with a heavy heart that I say goodbye...
As Nancy Smythe said, you were a generous and happy man! This earth has lost a great human being.
I know that I was only a brief part of your life but when I was in those school years, you helped me feel better about myself and learn to love myself. I will never forget it.
I'm so sorry I cannot attend your Celebration of Life but I have a family commitment. I so wanted to hear all the stories of your life that I missed.
Brian you will always have a special place in my heart.
Comment Share
Share via:
K

Posted Jul 16, 2019 at 01:18am
Michael was so jealous of Brian when Debbie announced that she was marrying Brian. Debbie was the love of Michaels affections. Michael was a 5 years old in the daycare Debbie worked at in 1988.
Bless you for the years your family had together, you are the lucky ones. Love you always.
Comment Share
Share via:
K

From Mike and Jeff Kirkeby and Kate
N

Posted Jul 15, 2019 at 07:18pm
Bri.
You and I attended school together since Grade 3 and we never really knew each other . (Until I was 16, lol ).
After we graduated we became friends and we never looked back. It didn’t matter how much time elapsed between visits, we just slid back into the same groove. And you always made time for a visit when I came to Calgary.

One of my favourite memories is floating down the Bow on inner tubes with you and Deb on your wedding day. Deb had confetti in her hair, looking lovely . The sun was shining - such a beautiful day.
And recently, you and Deb came to PEI on business and out of the blue you helped me move all my belongings when I was leaving my husband.
You had more energy than anyone I’ve ever met. Deb and I called you the energizer bunny.
You have always been a generous and happy man.
And we argued all the time. Lol.

To my sorrow you are gone. I have recently moved back to Calgary after 35 years away and you are gone . I didn’t even get a chance to see you.
So I weep and remember.

I was recently told that you and I are cut from the same clothe. I take that as a huge compliment .
Love you Bri.
Stampede won’t be the same without you 💕. 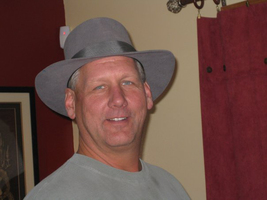 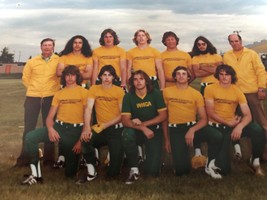 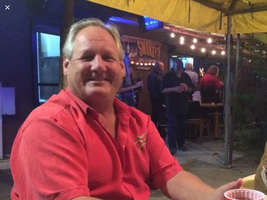