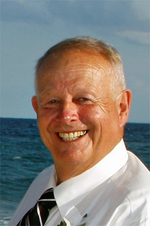 Barry passed away peacefully at home on Wednesday, December 9, 2020 following a long and courageous battle with cancer. He had celebrated his 80th birthday in July.

He was born and raised in Winnipeg and began his working career there. He was transferred to Saskatoon in 1965 and then to Calgary in 1967. Barry loved the mountains and the opportunities for skiing, camping, boating and fishing, and especially loved his summers at Mara Lake, BC. He was always up for a challenge when anything needed fixing and was often involved in home renovation or mechanical projects for his family, friends and neighbours. Barry was a salesperson who delighted in meeting new people, hearing and telling stories, and having a chat with friends.

Barry is survived by his loving wife Vivienne, his daughter Lauren (Lowell) of Calgary, his sons James of Calgary and John (Stacy) of Kaslo, his grandchildren Jessica (Ross) of Airdrie and C-Jay of Crossfield, and two great-grandchildren Taylor and Dominic. Also surviving is his brother Ken (Florence) of Winnipeg, niece Tanis (Alex) and nephews Dan (Roseanne), Kevin (Patti) and Bryan (Linda) and brother-in-law Roy, and dear cousins in southern Manitoba and Saskatchewan. He was predeceased by his father John in 1966, his mother Gertrude in 1970 and his sister-in-law Cindy in 2005.

A Celebration of Life will be held at a later date. The family would appreciate charitable donations to the Tom Baker Cancer Centre/Alberta Cancer Foundation. We would like to send our sincere thanks to Dr. Patricia Tang and her team at Tom Baker and the incredible staff of Palliative Care that have supported our family over the last few months. To share condolences, stories and photos of Barry visit www.choicememorial.com.