To share your memory on the wall of Angela Stogrin, sign in using one of the following options:

Angela was born in Elk Point, AB, to Louise and Casey Crebas, and passed away surrounded by her family in the Royal Alexandra Hospital in Edmonton. Ange will be misse... Read More
Angela Mary Catherine Stogrin
June 4, 1965 – February 25, 2020

Angela was born in Elk Point, AB, to Louise and Casey Crebas, and passed away surrounded by her family in the Royal Alexandra Hospital in Edmonton. Ange will be missed by her husband Robin, daughter Lea, her mother Louise, along with her brothers and sisters, Luke (Joyce), Marcel (Fran), Tim (Caroline), Yvonne, and Selina (Dan). Auntie Angie will also be fondly remembered by her many nephews and nieces, as well as their children.

Shortly after Ange’s birth, the family moved to Alix, Alberta, where she spent her formative years and met some lifelong friends. This is where Angela’s love of flowers and gardening started. She not only saw her mother keep a wonderful garden, but during summers in high school, she also worked for the town cutting lawns and keeping the town tidy. This led her to try the floral course at Olds College, but the cold water was too much for her delicate hands. If any of your flowers were showing any signs of neglect, she would be refreshing and rearranging them while talking happily the whole time. In Calgary, whether she was in a small apartment, or her home of 18 years in Parkdale, Ange always kept indoor plants. In the Stogrin yard, she also kept a wonderful garden of both flowers and vegetables. With their home located on a busy hospital route, Ange and her family made sure that the lawn, flower beds, and planters put on a good show in the summer.
After high school, Ange took a couple of years to find her way, but finally settled in Calgary. There, with her cheery personality, she easily met many friends. After working a few odd jobs, she started at Turbo where she met many great people and cultivated new friendships, as well as helping promote Turbo on the rodeo scene. (Some said the best day at the Turbo rodeo booth was when a beautiful tall brunette, who could strike up a conversation with anyone, worked their table.) One of those friends at Turbo eventually introduced Ange to her husband and partner of 19 years, Robin. In 2002, this relationship produced one of the greatest gifts for Ange and Robin, their daughter Lea.

Ange was always about family and friends. Whenever they got the chance, particularly in the last few years, Ange happily hosted the family dinners. She would freak out and yell, but everything always worked out, even the gravy, which she fussed about way too much.

In 1999 Ange went to Europe and spent weeks traveling on a memorable trip, which she documented in a photo album. Ange remembered the trips to Ontario to visit family, so she always insisted that the family have a vacation each summer. Some of the memorable trips were “The Highway to the Sun”, Seattle, Hawaii, as well as Vancouver Island.

Angela was gifted in art all of her life, and started painting with acrylics in the last few years. This created great joy and frustration for Ange. But she enjoyed the time that she had with other painters, including her mother-in-law, Irma. The family vacation to Seattle inspired Angela to create one of her greatest paintings, from the Pacific Northwest coast at the Olympic Peninsula. Sadly, the Vancouver Island trip had her start a wonderful painting of a boat in the mist in Ucluelet harbour that she never was able to finish for Robin.
Ange was a gentle human, but her family loved to test that gentleness. Through small irritating noises or mild (relentless) teasing, Ange would yell at her family “Don’t poke the bear!”

Ange also had a big heart and was very charitable. So, in lieu of flowers, please donate to the Heart and Stroke Foundation or the Canadian Cancer Society.

We encourage you to share your most beloved memories of Angela here, so that the family and other loved ones can always see it. You can upload cherished photographs, or share your favorite stories, and can even comment on those shared by others.

From cousins, Ella and Simona, nee Schrama, All the cousins in Holland, and others have sent flowers to the family of Angela Mary Catherine Stogrin (Crebas).
Show you care by sending flowers

Posted Mar 04, 2020 at 10:24pm
Angela was one of a kind as a wife, mother, daughter, sister and friend. Kind and thoughtful, she always chose her words carefully before speaking, and graced everyone in her presence with her caring, selfless spirit. That is the Angela we will always remember, including our conversations at Moose McGuires that were never boring, and always layered with compelling subjects and plenty of her infectious laughter. Angela's spirituality always connected with us, and she will never be forgotten.

Robin and Lea, we are always here for you. Know that Angela will be with you as well.

All the cousins in Holland

All the cousins in Holland purchased the Sweet Sincerity for the family of Angela Stogrin. Send Flowers 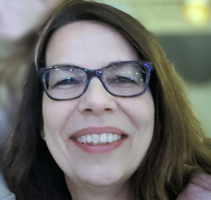