To share your memory on the wall of Ademir Guedes, sign in using one of the following options:

Provide comfort for the family of Ademir Guedes with a meaningful gesture of sympathy.

Ademir was born in Chapecó, SC, Brazil, on July 21, 1950. His parents moved to Laranjeiras do Sul, PR, not long after he was born. His dad’s profession – land surveyor - took them to Parana, where he grew up, into a family of nine children. He was very close, and very protective of his younger siblings.

Early in his childhood he began to play soccer with his brothers and friends, and became quite skillful in the sport he loved, and passed on this knowledge and ability to his three kids. He also learned to play chess, and became a great player, known to many good players in the State and beyond.

Miro accepted Jesus as his Savior and Lord in his late teens, and never turned back from following and serving God. In 1976 he married his sweetheart Dotty Orr, and a few years later graduated with a degree in Civil Engineering. When they decided to move to Canada in 1987, with their 3 children, he quit as an Engineer to teach Math, which he loved.

Ademir will be remembered for his good humor in most situations, friendliness and encouragement of others all around him. Their home in Brazil, and later in Three Hills and Calgary have been places of hospitality to many.

He was pre-deceased by his father, Oscar Guedes; mother, Cecelia Guedes, and two siblings who died as children. He leaves his beloved wife of 44 years, Dotty; children, Kelvin (Arian) Guedes, Melony ( Andrew) Turner and Stanley (Becky) Guedes; 8 grandchildren whom he adored, Hadessah, Seth, Eliana, Ezra, and Sammy Guedes, as well as Fia, Asher, and Darius Turner; his 9 Siblings, Americo, Angelina, Evonilde, Adones, Valdivia, Carmen, Alice, and Ceres and numerous in- laws and nephews and nieces who were much loved by him.

Special thanks to the Home Care staff and the staff at Bow View Manor for their loving care for the last three and a half years. Also, to the Free Evangelical church staff and members, and family and friends all over the world who gave such incredible support!

Receive notifications about information and event scheduling for Ademir

We encourage you to share your most beloved memories of Ademir here, so that the family and other loved ones can always see it. You can upload cherished photographs, or share your favorite stories, and can even comment on those shared by others. 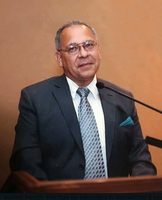