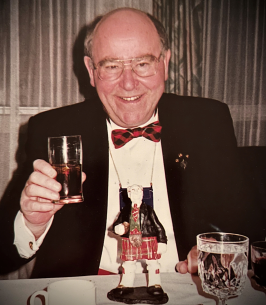 On March 10, 2022, surrounded by his family, Ian Douglas Greig passed peacefully in hospital in Calgary, after a sudden stroke. We loved him dearly and he will be sorely missed.

Ian is survived by his beloved and devoted wife of 57 years, Joan (née Bishell), his son Doug (Yolanda), his daughter Joanne (Ken), and his two grown grandchildren of whom he was especially proud, Braeden and Kaeleigh. In addition, he had recently welcomed two step-grandchildren into the family, Aryana and Rosalynne. Ian is also survived by his younger brother Don and sister-in-law Cory from Sherwood Park, as well as by many other in-laws and close relatives. Having attained the still-vibrant age of 80, Ian was sadly predeceased by his parents, grandparents, and other close relatives and in-laws.

He was born July 9, 1941 in Calgary to Edith Greig (née Gore) and John “Jack” Greig who was called away to the war for much of Ian’s early years. Ian’s English- and Scottish-born grandparents were also a nurturing part of his young life. He loved his hometown, heartily putting down roots and cultivating friendships that would last a lifetime.

Ian ventured away to attend the University of Alberta, where he had been accepted into the Regular Officer Training Program (ROTP). He chose the Royal Canadian Navy as his field of service during those years, and he would often recount many a colourful tale, for example about his cross-Pacific training cruise to Japan and back. His naval experience instilled in Ian a deep abiding respect for the military, and was perhaps the beginning of his fascination with ships and the sea, and travel in general.

Back home, he embarked on a long career as a Chartered Accountant, getting his start at ATCO and then becoming a partner in Miller McClelland and Company in its various iterations. During this time, one of Ian’s clients was Centron Construction whom he eventually joined as Controller.

In spite of the heavy demands of his work, Ian’s family was the center of his life. Dutiful and sentimental, he was deeply engaged as a husband and provider, a caregiver to his parents as they aged, and a loving and doting dad and grandpa. He was extremely proud of his kids’ and grandkids’ accomplishments and supported them in all of their extracurricular activities. In particular, he embraced his Scottish roots with Joanne’s highland dancing and Doug’s highland piping activities. Rarely did a Robbie Burns night go unmarked, and a trip to the “old country" was a highlight of Ian's retirement. With his grandchildren, he spent countless hours cheering loudly (and muttering under his breath when there was a "bad call”) at every hockey rink, baseball diamond, and soccer, football and rugby field he could. He rarely missed a dance competition and patiently sat and watched the same performances, from one competition to the next.

A natural leader and organizer, Ian believed in living a life of service, which was evident in the various endeavours he found himself a part of, whether at work or otherwise. He was a founding director of the Palliser/Bayview/Pumphill Community Association, worked diligently on the Board of Doug’s youth pipe band, The Glengarry Highlanders, and was renowned as a go-to resource for friends and family for tax planning and preparation.

When tax season was done, Ian was on the golf course. He was an original member at what was then the Pinebrook Golf and Winter Club, and remained active there for almost 40 years. He had fond memories of trips with his golf buddies to the East Kootenays, and would pay tribute to many iconic courses in his travels, including Pebble Beach and St. Andrews. Another of Ian’s loves over the years was the gridiron—whether coaching junior football in his younger days, or rooting for his Stampeders (“Go Stamps Go!”) and Seahawks (“Go Hawks!”).

Friendship was of paramount importance to Ian, and nowhere was that more obvious than in one of his proudest pleasures: Gyro, an International Fraternity of Friendship. In his 54 years as a member of the Stampede City Gyro Club—and with Joan at his side providing indispensable and unflinching support—he served his Club as President, Gyro District VIII as Governor, and the greater organization as International President. Ian received countless awards for his service, but his greatest and fondest achievements were the enduring relationships he developed with Gyros and the "ladies of the fraternity".

Should you wish to make a memorial donation to a charity of your choice, the family encourages you to consider the following, which have been near and dear to us and to Ian:

Inn From The Cold

The Heart & Stroke Foundation of Canada

Society for Treatment of Autism

A celebration of Ian's life is being held Saturday, April 23, 2022, 2:00 to 4:00 at the Canyon Meadows Golf and Country Club (12501 14th Street SW, Calgary AB).  We are taking COVID-19 precautions to promote the safety of our guests and to minimize spread of the virus. We ask that all in attendance wear a well fitted mask, ideally N95 or better. Hand sanitizer and masks will be available. Please refrain from attending if you have symptoms, have recently tested positive, or have recently been in close contact with a positive or symptomatic case.